This Absolute Vantage 11 Day Kenya Safari Package lets you experience Kenya’s Capital City, Nairobi in 2 days with visiting the Giraffe Centre and a 3PM pre-booked private visit at the Nairobi Sheldrick Elephant Nursery before heading to Amboseli to experience the wild herds of peaceful elephants in Amboseli with Kilimanjaro in the background amidst other wild game, birdlife flora and fauna home where you will stay for 2 nights before heading to Northern Kenya in Sarara for 3-nights. We then take you to one of the world’s famous Game reserves – Maasai Mara home of the Great Wildebeest Migration where we host you at the Entim Mara Camp for 3 nights. You will definitely delight in the contrasting scenery, spectacular wildlife and the civilized charms of this great land, the people and their economy in these areas as well as enjoy various activities such as wildlife viewing, relaxing sundowners and camp/lodge explorer. Getting to these locations is by scheduled light aircraft and 4WD safari vehicles 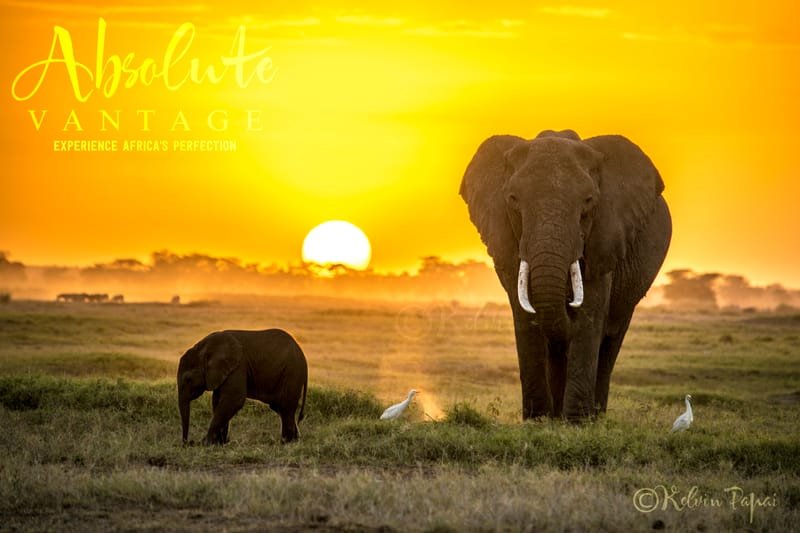 You arrive Nairobi with your flight ***Preferable PM flight***. You will be met by an Absolute Vantage representative who will then facilitate your transfer to your Bed & Breakfast accommodation – Macushla House in the suburbs of Karen for overnight

Macushla House is an owner-managed guesthouse situated in lush gardens in the central Karen district in Nairobi. It has six comfortable en-suite bedrooms. The bedrooms are spacious and well appointed. During the colder nights you will often be pleasantly surprised to find a nice hot water bottle hiding underneath the cover. Macushla house is ideal for single travelers, couples or families spending the night in this bustling city.

Awake, have a sumptuous breakfast courtesy of Macushla House and make your way to the Giraffe Centre for an up-close and personal touch with the endangered Rothschild’s Giraffes. The Giraffe Centre also known as African Fund for Endangered Wildlife have played a pivotal role in breeding the Rothschild Giraffes and re-introducing them back into the wild ever since the late 1970’s and double up as a Conservation Education centre for the Kenyan Youth. A 1 hour stay here is enough to be followed by souvenir shopping and lunch at recommended agreed spots in Karen Area (Mat Bronze Wildlife Art Gallery, Utamaduni Artisans, Talisman, Langata Link shops or Karen Blixen Coffee Garden). After our lunch and shopping time we head to the Sheldrick Wildlife Trust for our pre-booked 3PM private elephant orphan visit. This visit puts you in touch with elephants under the age of 2 years who have gone through traumatizing near death situations, lost their families and parents and are now orphaned – thanks to the Trust for having given them hope, a new home and family for them to grow and later own will be introduced back into the Wild. We then head back to our accommodation spot to digest all we had for the day as we look forward to the safari days to come.

On Day 3, you will have an early breakfast after which you will be transferred to the Wilson Airport to catch your flight to Amboseli National Park where you will stay for the next 2 nights. This is where you get to see elephants in the wild, living in harmony with other animals. Amboseli National Park is an open ecosystem boasting huge herds of elephants, zebras, buffaloes, hyenas, lions, giraffes, gazelles and numerous bird species not to forget the magnificent Mt. Kilimanjaro. Here you will indulge in mostly morning and late afternoon game drives as this is when you get action of the elephants getting into and leaving the swamps and crossing the park roads from or to where they call home. There is an opportunity to visit the Amboseli Elephant Trust to get enlightened about the work of Cynthia Moss highly recognized by her work researching elephants from the 1980’s. The talk and visit to AET must be pre-arranged early and pre-booked early along with a donation of $800 for the entire group.

While at Amboseli, you will stay at the Tortilis Camp

Tortilis Camp is a boutique camp bordering Kitirua Private Conservancy and Amboseli Park. The cam is named after the flat topped acacia trees that dominate the area around the camp. The tents are all spacious, with king or twin beds and elegant en suite bathrooms. There is a main lounge, bar and dining area, all exquisitely built with natural materials and thatched roofs, with magnificent views of Kilimanjaro. The Private House and Family Tent are located slightly separate to the main camp, upon the hill where they share a pool and enjoy magnificent views of Kilimanjaro. Activities to include game drives, walks, sundowners and bush meals take place both inside the national park and in the conservancy, where guests enjoy exclusivity.

In the northern frontier of Kenya lies the Namunyak Wildlife Conservancy, an area of 850,000 acres of pristine wilderness surrounding the Mathews Range of mountains. The savannah plains and lush mountain slopes are home to elephant, leopard, reticulated giraffe, wild dog and kudu in ever increasing numbers. This remote and dramatic landscape is also home to the local Samburu people whose age-old traditions, including the famed ‘singing wells’ are as much a part of the fabric of this land as the wildlife. Sarara is a conservation brand that partners with indigenous communities to build sustainability for people and wildlife through truly unique and experiential safari experiences.

Part of the community-owned Namunyak Wildlife Conservancy in the heart of the Mathews Range, and in partnership with the Northern Rangelands Trust, Sarara has fast become a flagship model for community conservation across Africa.

After your Sarara experience, On Day 8, you will be transferred to Kalama Airstrip in Samburu where we will fly you to the Maasai Mara for 3 nights stay. The Maasai Mara is well known for the annual wildebeest migration in which we have crossings take place in the Mara river between the months of July and September thereabouts. As a result, the Mara is home to the Big cats and a range of herbivores not to forget the big five. Some of the famous wild animals in the park you are likely to encounter include: lions, rhinos, hippos, crocodiles, giraffe, wildebeests, zebras, buffalo, warthogs, hyenas, jackals, wild dogs, buffalo, leopard, cheetah, many kinds of birds, antelopes and elephants.

On one of the days you have the option of per taking an early morning balloon ride over the Mara plains that will be crowned with a champagne bush breakfast. As you ascend aerially, beautiful features unfold before your eyes – gentle rolling hills, meandering rivers and lush grasslands. From this vantage point, you realize that you can locate wildlife with little guidance – giraffes, elephants, gazelles, hippos and many other grazers and foragers. If you are lucky, you may even spot the lordly predators like lions, hyenas, cheetahs and other hunters You also have the option of visiting a Maasai Village to get enlightened about the Maasai Culture

While in the Maasai mara, you will be accommodated at the Entim Mara Camp.

Entim is designed to give you the friendliest, most intimate, luxury safari camp experience and the best wildlife safari in the Masai Mara. Its prime location along the Mara River is unrivalled for seeing and photographing animals all year around, but particularly to observe the greatest wildlife show on earth; over a million wildebeest, zebra and antelopes migrating from the Serengeti into the Masai Mara (July-October). The Camp has 12 new luxury en-suite guest rooms raised on wooden decks overlooking the Mara River. Handsomely decorated using earthy tones, there’s a seamless flow from inside to outside and down to the river. Watch animals moving to and from the river from your private lounge and veranda, or during scrumptious meals at our open-fronted dining deck.

Today you awake at leisure, have breakfast and bid the Maasai Mara farewell. A drive to the airstrip to catch your scheduled 1-hour flight back to Nairobi. Arrive Wilson Airport and head for Lunch – perhaps at the Talisman Restaurant in Karen. Thereafter you will be transferred to the Crowne Plaza Airport Hotel where you will re-group as you await your transfer to the terminal to catch your international flight back home